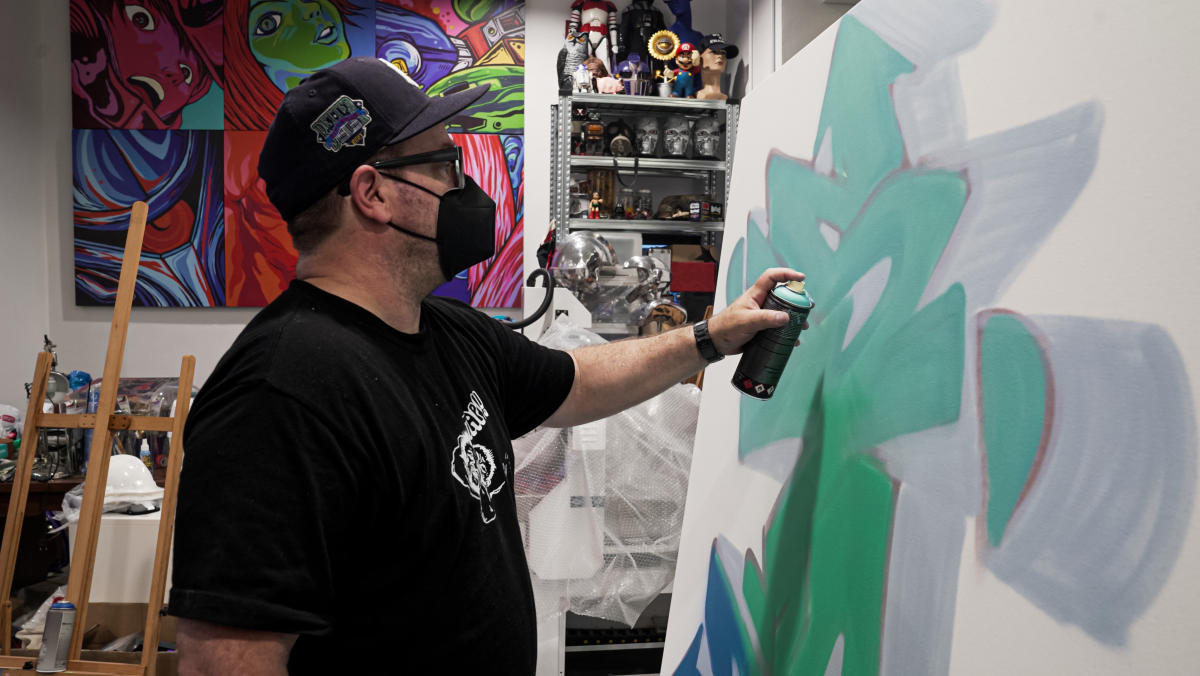 SINGAPORE — Josh Franklin must have a phenomenal, other-worldly depth of mental energy, you conclude, as his matter-of-fact disclosure that he had already completed all 15 pieces of art for his first solo exhibition in Asia — in less than a week since his arrival in Singapore — sinks in.

Franklin, more commonly known as Stash, flew into Singapore from New York City on 28 June to take up a one-week residency at art gallery Void Deck to produce original art as part of his book launch, Subblueminal, which revisits his 40-year creative adventure.

“We thought we would celebrate the book launch with an art show. So, the exhibition is basically the story arc of my history in the book,” Stash said in a recent interview with Yahoo Finance Singapore.

“The common thread to my story is that I’ve always painted and I’ve always utilized graffiti in my artwork, whether it’s through graphics, collaborating with brands or through my paintings,” he explained.

Stash of the past

Stash has gone from eager middle-school of student attracted to the alluring painting `subway cars’ underground to accomplished artist whose work is now only found aboveground, often in studios and galleries or as part of brand collaborations.

Stash was a 14-year-old high school student when he first started name-tagging subway trains. The year was 1982 in New York City — a time and place often thought to be the pinnacle of subway art, when trains pulled up blanketed in the spray paint sometimes.

At 17, Stash tasted tantalizing fame when his first canvas was featured together with more than two dozen other artists, including renowned graffiti artists Keith Haring and Jean-Michel Basquiat, at FUN Gallery’s “Graffiti, Thanks a Lot!” He carried on painting in the sometimes deadly subway tunnels until 1987. Moving above ground, he stayed true to his love of the graffiti art form.

Stash’s place in the storied history of the graffiti movement was sealed when he became the first graffiti artist to collaborate with Nike. With that, he started a new chapter in his career arc, which, so far, spans 40 years. More partnerships followed – Bape, Burton Snowboards, Leica and Reebok, among others.

Stash in the present

Burly and in his signature outfit of cap, loose T-shirt jeans, and sneakers, he is friendly, with an alert gauze and a quiet energy despite the weather that was “(killing me) a little bit although I’m getting more acclimated every day”.

He looks much younger than his 54 years. He makes eye contact frequently but visitors entering the gallery and viewing his work get first dibs on his attention.

After so many years as an artist, the appreciation of his work remains a high for Stash.

“I love eyes on my work. If it sells, fantastic, amazing. But just the opportunity to be here in Singapore to show my artwork — that, to me, is a payday; not financially, but in so many more ways than what money can do,” he said, relishing even the viewer’s smallest experiences and eager for more.

“(I still feel like that) after so many years. I do, I do. I feel blessed. I think it’s part of why I have continued doing what I do. It’s a very small detail in the big picture, but it’s that little detail that keeps me going: ‘All right, next time, I’m going to go even harder.’ It’s very inspiring for me.”

It would surely have delighted him, then, to know that almost all of the artworks he created in Singapore was snapped up within four days. The two highest priced pieces — Botanic Gardens and Beauty World — sold for S$30,000 each. The most affordable, Red Dot, 2022, Singapore (edition of 50) went for S$1,000 a pop. Only the Indigo series remains, as of 5 August.

The father of two shared his thoughts on his artistic trajectory, non-fungible tokens (NFTs) and his relationship with money.

Describe your evolution as an artist.

I started as a graffiti-artist-painter. Then I started making products to be able to pay for my painting studio. But then, that was the birth of what we know as streetwear; a lot of early stuff on clothing shifted where I was going in my career. And so, I focused on that. I painted all the time, but it wasn’t my primary mode.

I’ve realized how to use my creativity as a painter doing graphics and learning graphic language, and then translating that onto T-shirts and other apparel to figure out how to get paid and make ends meet. And, oh my gosh, now I’m a graphic artist. I didn’t see (before) because I was a graffiti artist, and I didn’t realize that was a whole other world unto itself.

I learned through process and trials, and figuring out where I was, and wow, now I’m over here.

What do you want to do next?

I’ve been exploring. I’m really into painting right now, and I really love the opportunity of coming here and having a limited amount of time in residence to create a body of work; it’s really fascinating. Moving forward, I want to explore more sculptures, take my art into more 3D and look at other avenues that I can be creative within the same visual sense that I’ve been driving.

The way I live is like this: I’m creating artwork and putting it into the world and seeing how it gets received. Little by little, more opportunities are coming up and more conversations are being had. I’m widening my demographic.

You dabbled with NFTs last year on NFT trading platform 5th Dimension. What are your thoughts on them?

It was very minimal, and it was a little introduction done with friends. I was curious. I figured it doesn’t hurt to sort of put my name into the hat and see what happens, you know?

I haven’t really explored NFTs – I’m sort of more a bystander at the moment, watching and learning more about that world. It’s fascinating for me. I’m more of a hands-on (artist), I like getting paint on my hands. I’m learning more about dialogue and understanding. NTFS are a little deeper than what people think. There’s a lot of schooling to be done. I don’t feel the call. I’m so busy right now in the traditional sense of making paintings, I’m working on my art.

Overall, I’m indifferent. I’m ok with it. It’s the same to me: I’ve gone from vinyl to cassette to CD to mini CD. I’ve watched there technology advance, and I understand’s a place for it. Do I still use an old CD player? Yes. Sometimes. So, I’m still not there yet. I respect and understand it, and I’m completely open to it.

I have a lot of friends that are really versed in that world, and I’m really happy for them. I’m trying to figure out what my place may be in that community, if at all.

Money is not a driving factor in what you do, then?

No, it’s not. But let’s be real. I have a family, I have kids and I have mouths that I need to feed.

But my purpose in doing my artwork comes from a different place. The origin of where I started, being a graffiti artist in New York City subways, you didn’t get paid. It wasn’t about getting paid. We didn’t have the knowledge then of, ‘oh, this is going to translate years later into all these beautiful mediums, clothing, and NFTs’. It was a passion. It was a personally-driven movement that I still carry with me today.

I’ve learned how to market myself, and I’ve learned how to utilize all the skills and tools that I’ve trained myself with to translate them into things that I can commodify. That’s a gift. It took a long time to acquire. It wasn’t a sudden occurrence. I went through a lot of ups and downs, like all of us do.

I’m happy that my time through the process has allowed me to create, share my creativity and get paid for it, for sure.

Any favorite piece of work?

Wow. I’ve been asked that a few times. I make a silly joke about how I love all my children. It’s really hard because I like things at different times. Today, you ask me and another journalist can ask me another day, and it may be a different answer because that day, I felt inspired in a different way. And you can see that in my art, over the periods.

I think that’s the reason I would never want to get a tattoo because I’m scared, I change so quickly. I don’t even have stickers on my computer — I’m not that person. I’m weird that way. Things that I was into six weeks ago, I’m not into next week.

I love tattoo art though. It’s the most beautiful thing in the world. When my daughter turned 23, she wanted a tattoo, and I took her to a good friend of mine, an incredible tattoo artist named Mr. Kaves. He gave her a beautiful tattoo. I was impressed and actually kind of jealous — not of the tattoo but the attitude, the confidence that comes with wearing a tattoo. I lack that confidence.