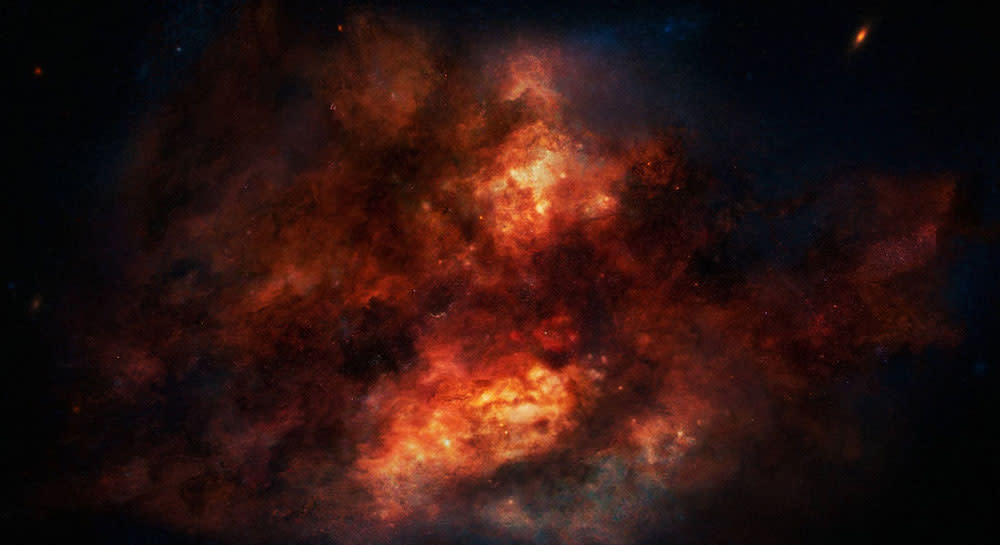 When you think of a galaxy, you probably picture some gorgeous, sprawling spiral-armed disk loaded with bright blue stars and pink/red clouds of gas dotted along the arms. And in truth many galaxies are like that, including our Milky Way, while others are elliptical, or irregular, or even peculiar.

The common denominator is that they’re loaded with stars, millions or billions of them, so many that from a distance they blur together into a milky glow.

But recently astronomers found some galaxies that don’t look like this at all. Located billions of light-years from Earth, they seem to defy what we know about galaxy structure. Almost no starlight is seen from them, and most of the light they emit is in very long wavelengths, far outside what the human eye can see. They’re dusty — that is, they have clouds made up of grains of iron, rocky, or sooty (carbonaceous) material — but that dust is a lot cooler than you’d expect for a normal galaxy.

These weird galaxies have been a mystery for a while, but now a team of astronomers thinks they have the answer: These galaxies aren’t just dusty, they’re choked with dust, so much that they completely block the starlight from inside them. In fact, these galaxies are positively see bursting with star formation, but it’s buried so deeply in opaque dust that these galaxies are dark in the kind of. If they didn’t have all that dust these galaxies would be blazingly luminous [link to paper].

A portion of the huge Taurus Molecular Cloud is seen here in two-panel mosaic. The darkest areas are where stars are being born, hidden from view by thick clots of dust. Credit: Adam Block /Steward Observatory/University of Arizona

The galaxies were found in deep survey observations of the sky. They’re practically invisible even when observed in the near-infrared, just outside the visible spectrum, but at progressively longer wavelengths, from mid-infrared out to radio waves, they get brighter. If these were normal galaxies with a normal amount of stars making light and warming up the dust around them, they’d be brighter at shorter wavelengths of infrared. But they’re not.

Four such galaxies were known previously. The astronomers observed six more, all very far away; their light took 12 billion years to roughly reach Earth. Typically, to measure the galaxies’ properties, astronomers make some basic assumptions. For example, they assume the dust in star-forming clouds is thick enough to block visible light, but lets infrared light through. That’s usually a decent assumption.

But when they did that for these 10 galaxies they get contradictions and physical properties that don’t make sense. That’s usually a good sign one or more assumptions you’ve made is wrong. So they then changed that assumption, and redid the math assuming the dust was very, very thick; so dense that not even infrared light can get out.

Artwork showing a dark galaxy loaded with dust that glows feebly in visible light and hides a huge amount of stars forming inside. Photo: ESO/M. Kornmesser

These galaxies are absolutely jam-packed with dust, so much so that even in infrared we’re only seeing the surface of these clouds. It’s not so much these galaxies have more dust than usual, but that they’re small, so the density of dust is far higher. Normally infrared light can escape even from deep within a dust cloud, but in this case they’re so dense they’re opaque to it.

And that in turn means that to explain the amount of light we do see, these galaxies are cranking out stars, dozens of times the rate at which the Milky Way makes them. These are true starburst galaxies, even though, bizarrely, they emit no optical light we can see. They’re dark galaxies.

OK, so that’s just objectively cool; galaxies so thick with dust they veil what they’re doing inside. But this is actually important to understand. We measure the star formation rates of galaxies in various ways, but it’s a great way to understand what a galaxy is doing, how much gas and dust it has, and so on. The rate at which stars are born tells us a lot about the galaxy… and also what the Universe itself was doing when the light we see left that galaxy, so sometimes deep in the past.

The next question to answer is why they’re this way. Are these examples of galaxy collisions in the early Universe? Are the stars forming there under different conditions than in the nearby Universe, such that they make more dust? With only 10 sample galaxies known this is not clear.

what is clear is that we’re still learning about what the distant, early cosmos was like, and that sometimes what we want to see is hidden from us until we find a clever way to see it. In this case the big chunk of star-forming galaxies were invisible. What else is out there we’ve overlooked?