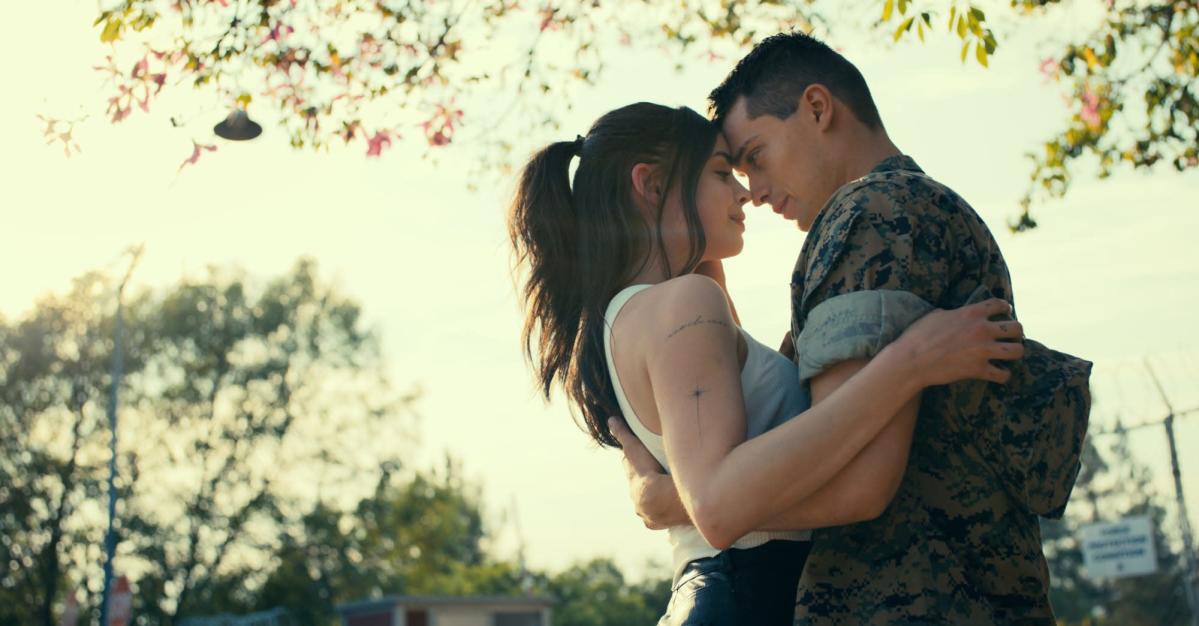 After eight days, it’s over. That’s how long the Russo Bros.’ “The Gray Man” topped Netflix’s domestic chart for most-watched movies — only to be replaced by the new release of another Netflix Original, “Purple Hearts,” a low-budget military-immigrant novel starring singer-actress Sofia Carson (“Descendants ”) and Nicholas Galitzine (“Cinderella”). “The Gray Man” didn’t disappear — it dropped to #2 — but that can’t have been the Netflix expectation for a $200 million action film from the directors of “Avengers: Endgame,” the biggest theatrical release in the last six years, starring Ryan Gosling, Chris Evans, and Ana de Armas.

The streamer reported that “Gray” smashed over 88 million hours in worldwide viewing its initial weekend, the fifth highest for an original film. That’s 60 million hours fewer than last year’s “Red Notice” starring Dwayne Johnson, Ryan Reynolds, and Gal Gadot. “Red” spent 12 days as #1, including two full weekends, but more important is the staying power of an expensive original. “Red” placed in the top 10 over 11 weeks; “Gray” will need to stick around until mid-October to accomplish the same, with total hours viewed as the most important metric.

New this week on the Netflix chart are Argentine mystery “Recurrence” at #4 and documentary “Shania Twain: Not Just a Girl” at #7.

“Sing 2,” which spent more days at a Netflix #1 than “Gray,” is still #3, highest among non-original titles. It’s staying power is impressive: It’s spent five weeks in the top three, and that’s after five weeks on VOD and $162 million domestic in theaters. It’s a performance that reinforces the argument that extensive theater play enhances performance on a streamer.

VOD remained mostly static this week without recent theatrical releases for the inventory. “Jurassic World: Dominion” (Universal/$19.99) remains #1 on Vudu (ranking by revenue) as well as on iTunes and Google Play (both ranking by activity). That’s the third week for its across-the-board lead, something last accomplished by “Spider-Man: No Way Home” (Sony) when it became a #1 for five weeks.

Universal, including its Focus unit, continues strong with 11 of the 30 slots on the charts. Their standard early release of titles after either the third or fifth weekend of theatrical play (depending on opening weekend gross) continues to show strong results. “The Black Phone,” also $19.99, is still #2 at iTunes and Google Play.

Apart from the two Universal titles, “Uncharted” (Sony/$5.99) and “Fantastic Beasts: The Secrets of Dumbledore” (Warner Bros./$5.99) placed on all three charts.

The sole new entry this week is “Green Lantern: Beware My Power” (Warner Bros./$19.99). The original made-for-home viewing from DC Comics is the fifth title in its series of animated Tomorrowverse titles, which began with “Superman: Man of Tomorrow” in 2020. Warners released it for home viewing a few days after it debuted “DC League of Super-Pets” in theaters, where it opened to #1 but below expectations at $23 million.

The rest of August should be more lively for VOD, with expected availability for “Thor: Love and Thunder” and “Lightyear” (Disney) as well as “Minions: The Rise of Gru” and “Nope” (Universal). Still TBD are “Top Gun: Maverick” (Paramount) and “Elvis” (Warner Bros.); their strongthearcial holds may mean home viewers will continue to wait.

iTunes and Google Play rank films daily by number of transactions. These are the listings for August 1. Distributors listed are current rights owners.

Most viewed, current ranking on Netflix’s daily chart on Monday, August 1. Originals include both Netflix-produced and -acquired titles it initially presents in the US Netflix publishes its own weekly top 10 on Tuesdays based on time viewed.