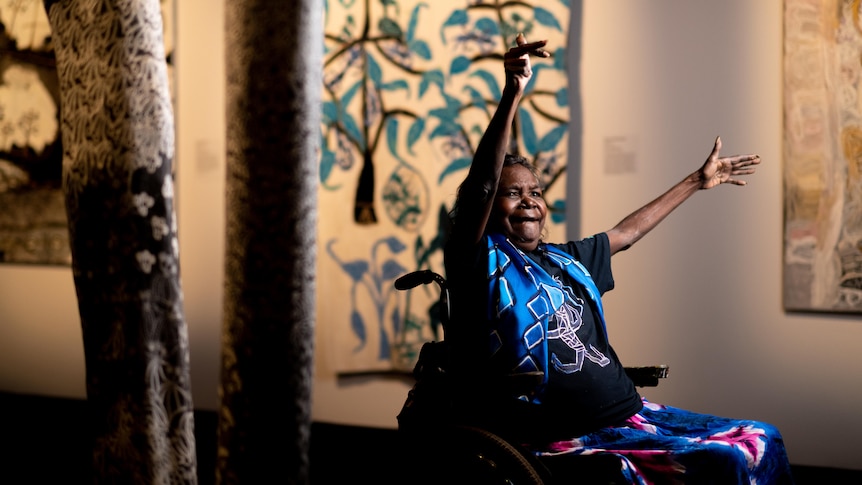 The winners of Australia’s biggest and most Indigenous art awards will be announced in Darwin tonight, with each to take home a share of what’s now the richest art prize in the country.

The National Aboriginal and Torres Strait Islander Art Awards takes entries from across Australia and all types of visual arts, from bark paintings and traditional weavings, to digital works and sculpture.

This year the overall winner will be awarded $100.000, bringing the top gong in line with first prize in the annual Archibald Prize.

It’s recognition that curator and Arabana, Mualgal, and Wuthathi woman Rebekah Raymond is “overjoyed” to see paid to the artists involved.

“I think [the increased prize money] really shows a commitment to celebrating these artists,” she said.

“It shows an understanding that the vibrancy of Aboriginal and Torres Strait Islander art practice is at a global level, and the prize pool needs to respect and reflect that.”

Six other winners of individual categories will take home $15,000, an amount tripled this year by long-time awards sponsor Telstra.

The combined total of $190,000 is the biggest for any art prize in Australia.

Dozens of finalists from hundreds of entries — and seven winners

The winners will be announced at a gala event in Darwin on Friday night, which coincides with the opening of the two-week Darwin Festival.

A panel of three judges have narrowed more than 200 entries down to 63 finalists, which have been installed together for the annual — free — blockbuster exhibition at the Museum and Art Gallery of the Northern Territory (MAGNT).

A winner for the overall prize is chosen from among the finalists, as well as one for six categories including:

Now in its 38th year, the NATSIAA’s has celebrated some of the art world’s biggest names and most influential figures, from Djambawa Marawili and Betty Muffler to Vincent Namatjira and Kaylene Whiskey.

While the stories and techniques behind some of the bark paintings, weavings and carvings are ancient and traditional, Ms Raymond said it’s a mistake to think that only the younger artists are experimenting and innovating.

“These are contemporary works — they’re carrying on art that’s been around from time immemorial but they’re expanding practices, they’re pushing boundaries.

On display online, People’s Choice Award up for grabs

This year’s exhibition will again be accessible online, which has been the case since the first year of the pandemic.

The NATSIAA’s and other major events throughout the Darwin Festival spark an influx of visitors to the Top End each dry season.

But would-be gallery-goers who can’t travel interstate miss out — unlike other big prizes like the Archibald, the NATSIAA’s is not yet a touring exhibition.

Ms Raymond said the virtual gallery has been a success and is the next best thing available — for now.

“It’s no match, but it’s one way we can cross borders and really open up the audience, not only nationally but globally,” she said.

“For me, I think touring and sharing works is an important way to engage with more people, and for people to understand how important these works are.”

After the judges announce their picks, members of the public will also get to have a say on their favorite works.

Voting in the NATSIAA’s People’s Choice Award is open until the exhibition closes in January next year.