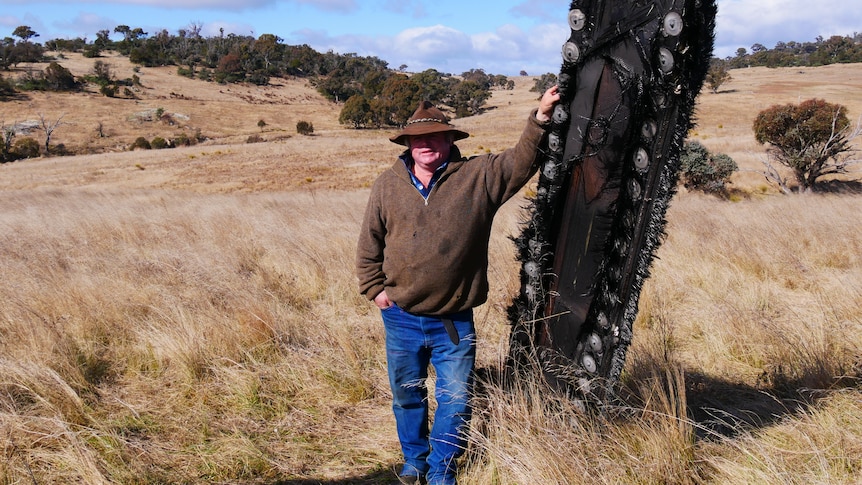 A large piece of debris found in the middle of a sheep paddock could be space junk from a SpaceX mission, and linked to a large bang heard across the region earlier this month.

Many of those who heard the bang on July 9 took to social media to report it across the Snowy Mountains in southern NSW, and as far away as Albury, Wagga Wagga and Canberra.

Speculation was rife that it may have been caused by the SpaceX Dragon spacecraft re-entering earth’s atmosphere after it launched in November 2020.

Mick Miners, who runs a sheep farm at Numbla Vale, south of Jindabyne, stumbled across an almost three meter high object wedged into a remote part of his paddock on Monday.

After the discovery, he called neighboring farmer Jock Wallace, who also found some mysterious debris nearby.

“I didn’t hear the bang, but my daughters said it was very loud,” Mr Wallace said.

“I think it’s a concern it’s just fallen out of the sky.

“If it landed on your house it would make a hell of a mess.”

Give NASA a buzz

After contacting the Civil Aviation Safety Authority, Mr Wallace said he was told to contact the National Aeronautics and Space Administration in the United States.

“I’m a farmer from Dalgety, what am I going to say to NASA?” Mr Wallace said.

One of the pieces found on his property contained serial numbers.

Australian National University College of Science astrophysicist Brad Tucker said the debris was most likely from the unpressurised crew trunk of the craft.

He said it was possibly the largest piece of documented debris in Australia since NASA’s Skylab space station came plummeting back to Earth above Esperance in Western Australia in 1979.

A large oxygen tank from the station was later found by Pauline and Geoff Grewar in 1993 hundreds of kilometers from Esperance.

“In photographs of the debris you can clearly see charring, which you would expect from re-entry,” Dr Tucker said.

“It is very rare to see, because they don’t usually land on land, but in the ocean.”

He said the craft was planned to land in the Pacific Ocean between Australia and New Zealand.

“People often think they find small pieces of space junk, but they would burn up on re-entry, so it’s more likely to be large pieces like this,” Dr Tucker said.

Junk from the stars

Dr Tucker said the craft was likely to travel at 25,000 kilometers per hour at the time of re-entry and the debris and was likely linked to the widely heard bang on July 9.

He said it was likely made of carbon and aluminum composites.

He said recent reports predicted there was a 10 percent chance someone on Earth would be “hit by space junk” this decade.

“A big piece of metal falling from the sky is never going to end well,” he said.

Dr Tucker said there was also concern over the uncontrolled return to Earth of a Chinese booster rocket over coming days, which was being monitored by the United States Space Force.

The Microgravity Experimentation Space Technology and Industry Institute program leader said the debris had been tracked to South East NSW.

“This shows that although most of it is supposed to burn up in the atmosphere… large pieces don’t,” Dr Allen said.

“This is quite worrying, and shows it’s critical to track debris.

“There could even be issues with it damaging the ozone layer, so we need to do more research in this area.”

Local news direct to your inbox

ABC South East NSW will deliver a wrap of the week’s news, stories and photos every Thursday. sign up here